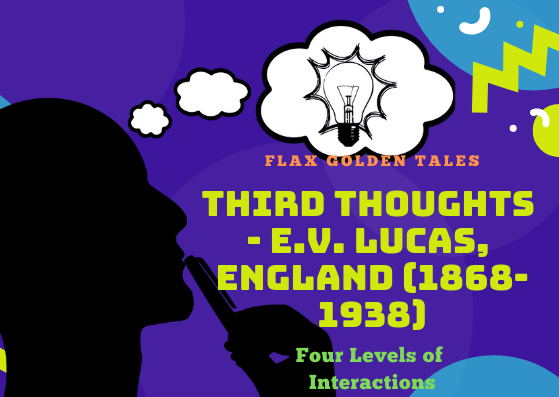 This event was told by the narrator’s friend. According to the narrator, his friend’s luck was always to buy things in the expensive and to sell them at the cheapest price. But once he bought a portfolio of Tuner in 10 shillings and sold it in 50 pounds. He was very happy to get the profit of 49 pounds and 10 shillings. That’s why he began bargaining with his own soul for sharing fifty percent of his profit with the dealer. But he thought he was doing wrong. So he decided to give him just 10 pounds. But again he thought it would be a crime because he wouldn’t get such letters every day. So, again he thought 5 pounds would be enough. But later he thought sharing his profit would be a challenge to the goddess of business. Therefore he thought one pound would be enough and it would cause no harm to both of them. In the end, when he reached the club for lunch, he played bridge and lost all the money he had. Then he concluded that he was under no obligation to share the profit with the dealer because he had already taken enough money from him.

The story writer is trying to show that speaking in impulsion is easy but implementing that in a real situation is difficult. In the story, the businessman talks to provide half of the profit to the dealer at first. But finally, he is not ready to provide even one shilling. The writer is also trying to show that everybody talks about over generosity. But when their turn comes to implement in real life, they pretend and deny to do what they have said.

Although the story is very interesting to read, there are some points in the story with which I don’t agree. Would there be a businessman buying things at the expensive price and selling at the cheapest price? This is the selfish world. So would there be idealism in the business like to share the profit? Would the narrator surely send half of the profit if there had been, tickets and the hour hadn’t been late? Did the dealer really sell the painting at so low price? Can’t dealer recognize Turner’s painting?